I know I’ve been talking about this for months and how excited I am to show you guys. It’s still not 100% yet but I’m working with the small space. Got the furniture bits in there and now it’s time for all the decorations/plants/etc. So…Here it goes!

After much discussion I decided to go with dark gray walls and white furniture. Seems to be “in” for the moment so I went with it! Funniest bit was I worked forever on painting this room. First coat didn’t really dry as dark as I wanted but I was ok with it. Went back to the store to get more paint, started painting and found they were two totally different colors. The girl who mixed the paint the first time around completely gave me the wrong shade of gray. THANK YOU, MORON! So, I decided to leave the largest wall as the lighter gray and the rest as the dark gray….and this is what we have!

Then we have the cubed bookshelf. It’s my stock of English books! 🙂 And a few of Toblerone’s. I told myself I would go back and read all of these again. Doesn’t hurt! I definitely need to add to it though, no empty spaces!!! 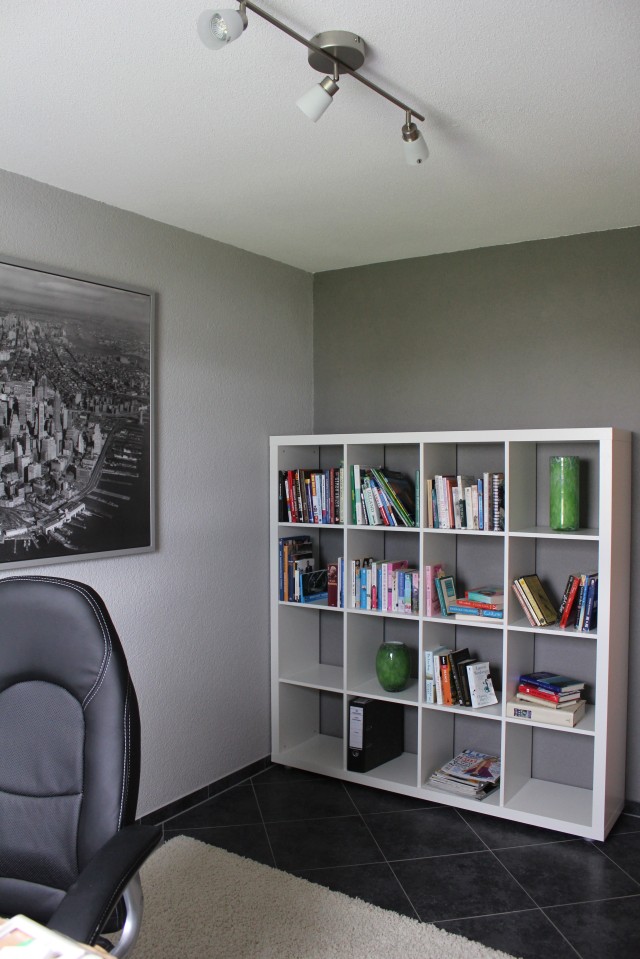 This picture is amazing. Everything old is what I want in this room and this is a scene of NYC in 1932. Not sure you can see it so good because of the glare (SORRY!) but the harbor is missing quite a few buildings and this is long before World Trade Center was built. Back before all the terror and Prohibition was just ending. Just a great piece if you ask me!:

And of course this is my favorite part so far. Right now there are pictures of my grandparents and family – all B&W pics of course. It was these pictures that gave me the idea for the room so I went with it. I felt I needed a special place for them to be displayed. Soon this will be overflowing with them and from Toblerone’s grandparents too. Just have to make the copies but it will be all different sized frames all overlapping one another…chaotic…because that’s what family is. A whole lot of love and chaos and in this case – a mix of cultures and memories:

So, that’s what I have so far. I’ll be adding more vegetation to the room to add some color to it but for now it’s my little hole in the house. It’s my sanctuary to write and have peace of mind. It may not be anyone else’s Heaven but for me…it does the trick as far as inspiration goes.

Let me know what you think and what ideas you have for other decorations to liven it up a bit!

Let’s see, where to begin.

1.) Our Garden situation. Ha. I realized there is no possible way for me to write this in a nice way. The company that was supposed to come JULY 1st (!!!!!!!!!!!) obviously did not. It’s been 17 days and during those 17 days we had a heck of a time trying to get in touch with the owner of the company. He screened our calls, didn’t return messages. We turned on “stalker mode” and called 4 or 5 times a day. Finally, a not-knowing secretary answers the office phone and gives us the dudes mobile phone number. HA! I’VE GOT YOU NOW, SUCKER!

Well, he fed us a million excuses as he choked on his words in fear. Saying that one of the workers was out due to a sick father, another worker had some other ridiculous thing like he lost a leg in a bread cutting accident. Who knows. Needless to say, the dude said he would call us on Friday (that was two days ago) with a full report and a date of when he would be able to start. I’m sure you guessed it, he didn’t call. I’ve decided every day he goes without calling or starting, I’m knocking off 500 Euro from the contract of 21,700 Euro. At this point, he’s down to 15,000 Euro. I hate unreliable people. It’s not my thing. Either way, it needs to be done by August 27th because I’m throwing a big party here and I promised people the jacuzzi would be up and running. And it will be – god willing!

2.) My language classes – you know the one that is for a year, 25 hours a week, 5 hours a day, every day – will start in the beginning of September when the school holiday is over. I thought I was looking forward to it and a bit of me is, however, it’s just an awful long time to be in a classroom when I have enough to do at home. I mean, seriously, I would rather be cleaning or something like that. (I have housewife syndrome!)

3.) Because of the undisclosed reason that is keeping me quite busy lately I’ve decided that since I won’t be traveling much (our trip to the US has been cancelled for now due to this as well) I will do a typical 30 day Blog challenge. Why not? Get to know the sugar behind the spice, ay? So it’s a new topic, every day for 30 days. I may change a few of them because I think they are ridiculous.  I will start this next week I think on Wednesday or Thursday probably and go from there. I regret to say that the majority of my blogs for possibly the next 6-8 weeks won’t all be about Germany and all the sites and crazy ways of the Germs, but I want to give you something! So, like it or not, thats what you’re gettin! 🙂

4.) I’ve decided to ask around and find the best and easiest way to make an Erdbeerkuchen  directly from a German because I have a lot of traffic checking out my blog on the matter in which I didn’t get into specifics. I only threw around my frustration with reading directions in German and took pictures. So, that will be coming soon as well!

5.) I’ve been dying to show you guys the outcome of the office here but it’s not entirely finished. “We’ve only just begunnnnn.” (Singing the Carpenters in my head) The painting is done and all that but I really didn’t want to show you guys until all the pictures were on the wall and we had shelving and what not. We have a desk, a chair, a rug, and the rest is boxes of books that need a home! I may show you the before and during. At a later date you get the “After and completed pictures.”

6.) I’ve decided to find some sort of Blog Ads – brings in more traffic and the like. Anyone have any good suggestions? Ones that are free would be better obviously! 🙂 This would also motivate me to write more if I knew I had people coming to the site!

Thats the update for now. I’ll be writing more later. I PROMISE this time!

Until next time, readers!! xoxoxoxoxo