After almost 2 years here I think one of my top 5 issues is remembering peoples names. Sometimes they are just so different and for whatever reason, my brain just refuses to allow me to contain this info! So, I’m sitting here reading the back of the newspaper which lists all of the people who just got married, passed away, or had babies. No love stories and all that hullabaloo included…just names.

Here are a few that I can not pronounce to save my life. Thank you to the hubs for helping me on this!

Thoughts?! Are these names you have a hard time pronouncing too? Maybe even to remember?!

Instead of taking notes like I should be during my class I’ve been writing down bullet points of all the things that annoy me about all the people in my class. We’re a class of 15 women. ONLY women which isn’t so bad. I started last week thinking/hoping that at least there would be ONE person from either England, Ireland, or America. Anything familiar would have been wonderful. Of course not…this isn’t heaven. It’s purgatory.

I’m not racist, not at all, but I have absolutely NO patience or sympathy for the stupid! We have women from countries such as Turkey, Tunisia, Serbia, Kosovo, Russia, Ukraine, Romania, Mazedonia, and Montenegro. (Note: The girls from Montenegro and from Russia are the only other smart ones in the class.) So on top of trying to figure out where some of these places are in the world and what kind of life they came from I have to juggle their names which are crazy.

Nefise, Redife, Habibe, Dragana, Mevlude, Bouthoina, Zehra, Yildiz, Resavjc……. HUH!?!?!?! I’m sure my name isn’t any easier to them but I’m the only one who shortened my name to make it easier for those who have trouble. Not sure how you could have trouble with “Kait” but whatevs.

Our class is every week day for the next nine months – meaning I’m stuck in this hell until July. I spend 4 hours and 15 minutes with these people and I would rather spoon my eyes out. I don’t consider myself “Advanced” but at least I’m TRYING to learn something. These girls have every color pencil, pen, highlighter, eraser you can possibly imagine. Their notebooks look like Lisa Frank folders, however, they don’t have a clue what they wrote in it! Last time I checked people this is NOT an art course…it’s a LANGUAGE course! (Do you remember what Lisa Frank is? Let me remind you……)

Speaking of speaking…everyone mispronounces everything and it makes me want to punch a baby. I mean I’m not perfect either but at least if the word is in front of me, I try to read it correctly. If a word ends in the letter “l”, I’m not going to end the word with a “t.”

So besides the obvious reasons why I can’t stand these people here are the real reasons all these feelings sparked:

1. One younger girl, who is now pregnant, brought in her wedding album. She’s from Tunisia and I was interested to see all about her culture and how they do it. It’s totally different from what I’m used to and not something I would prefer but this is her culture. The rest of the class looks at it and a few of the girls told her she was really fat in her pictures. Um….do you have NO manners?!?!?

2. Then these same girls turned to another one and asked her if she was pregnant. Lets keep in mind she has a great figure, doesn’t look overweight, out of shape..nothing. NOTHING that would make you think she’s pregnant. RUDE. These people are complete scum.

3. The girls all sitting around me literally grab my workbook from me to copy my work. How are you going to learn anything, you morons, if you keep copying my work?!  And how about asking for my help first? And if you seriously don’t understand then I will show you! Seriously….going to punch babies.

So even though I’m stuck with these idiotic people I learned something. The Turkish women specifically all want to learn but they don’t have the confidence. Every single one of them said their hobby was cleaning and having children. That’s not a hobby. That has nothing to do with your personal interests. I felt sad for them. I also realized that maybe in some cultures people don’t have filters (ahem..scum sitting around me)…and some people don’t have support or confidence from those at home. I don’t know if this is true or not (minus the fact about filters) but I do know that people deserve a chance. So, I’ve decided to try a little bit harder every day to be a little bit more patient.

However, I absolutely have NO patience for the completely brainless ones that walk in front of the bathroom line. UM…we are obviously all waiting here! And I’m assuming it’s because of people like this that they were forced to put this sign above the toilet in the bathroom. This concerns me on so many levels. I wasn’t aware that not only are people here to learn how to speak German but also how to use a toilet properly. Does this worry any of you about the type of place I’m in?! HELP! 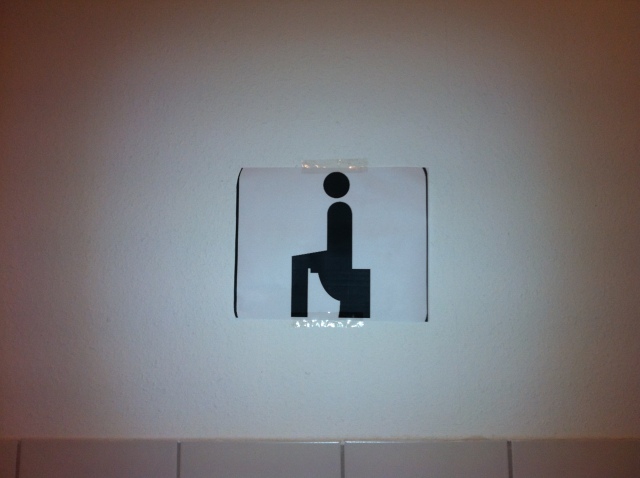 I have two teachers and one happens to look like my 4th grade teacher, Mrs. Witter. Which is scary and comforting at the same time. The second teacher is actually quite funny but she can get upset when someone repeatedly doesn’t know the answer…which happens often. I don’t have it in me to teach this kind of class. There is no way. I’ll stick to my idea of teaching children English or in business where people actually act professional and like adults.

Anywho…I’ll keep trucking on…even though I have to pay 2500 Euro for this class. Crazy right? However…if I was married it would only be 900 Euro. Like that makes a lot of sense! Germany…you’re not impressing me lately!

No stress this week…I’m preparing for my Oktoberfest debut in my Dirndl! If I can remember….I will take pictures to show you guys! And…of course if I’m still alive the next day!