I don’t watch too much TV in general, especially shows that in my second language but I from time to time I’ll catch a few here and there. The shows are somewhat similar. A lot of cooking themed shows and the usual stuff from the US with voice-overs. The commercials, however, always seem to shock me which isn’t too easy.

I thought it would be fun to share with you a few recently that I have seen. It’s possible you have them in your country as well. I’ve seen a few of these with voice overs in different languages so who knows! Either way, check them out and see what you think!

Sixx auf die 6 – A Dude dressed up as a chicken named Chick Norris and speaking terrible German?? Whats not to love?!

eBay – A Dog and a hamster…such unpredictable friendship!

Hornbach – A Commerical for a store like Lowes or Home Depot. This pulled at my heart strings. You don’t need to understand the language to feel the sadness.

Redcoon – I won’t say much about this other than “Billig” in German means “Cheap” in English. Oh and guys….you’re welcome.

Lions Cereal – It just wasn’t what I thought it would be at first!

These are my top 5! Do you have any others that you have seen and feel deserve to be in the ranking? If so, please share in the comments below!

And just one for fun…. A Turkish, Russian, and an Arab man all order at a beer garden….then a man from East Germany orders…

….The waitress tells him to speak German and then she will help him! lol…silly stuff!

Until next time, Readers!!!! xoxoxoxo

I recently explained to you the phenomenon of German Music known as Schlager. But I am about to share with you the ultimate phenomenon. The man that puts all other Schlager singers to SHAME! Thats right, to shame. He’s a hairy beast (stay with me on this) who really drives home the “flower power” statement. He is…..the great….the incredible….the hairy……..

Ok….I know, you’re not nearly as excited as I am when I say that but this guy is crazy weird. He has this cult following that is scary actually but I give in to it just because it’s so strange and SO bizarre! I first went to his concert last year and his concerts sell out pretty quickly. Upon arriving to the concert people were dressed in strange outfits, wigs, and bright neon colors and 95% of the people were holding sunflowers. Apparently, this guy loves sunflowers?!?! Anywho, before I go any further….this is the one and only Dieter:

Please tell me you’re as scared as I am… Oh wait, I found a better image….THIS should really get your loins moving. 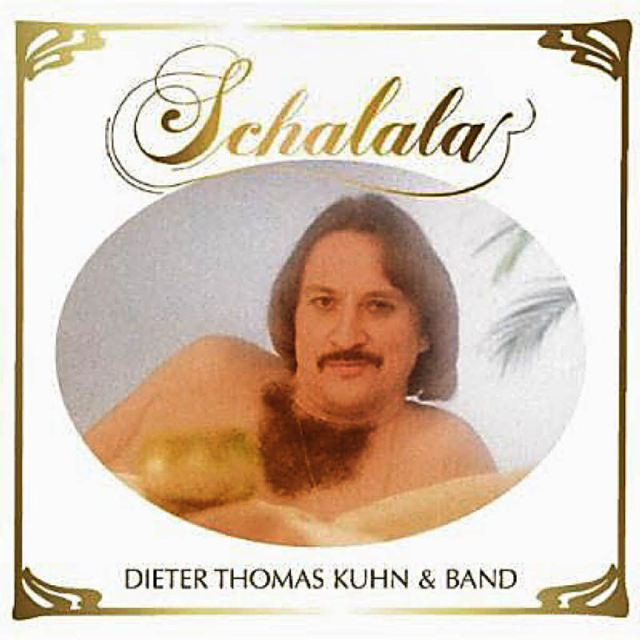 Ahhh yes….the faint scream of terrified readers. What a joyous sound! Well, his music is just that much better! This year we went to a concert in Rottweil (yes, a town with it’s own mascot, The Rottweiler.) And although we don’t really go so much for the music, we do go for the drinking and the weird costumes. Ours were pretty awesome too for a last minute put together kind of deal. What do ya think?! 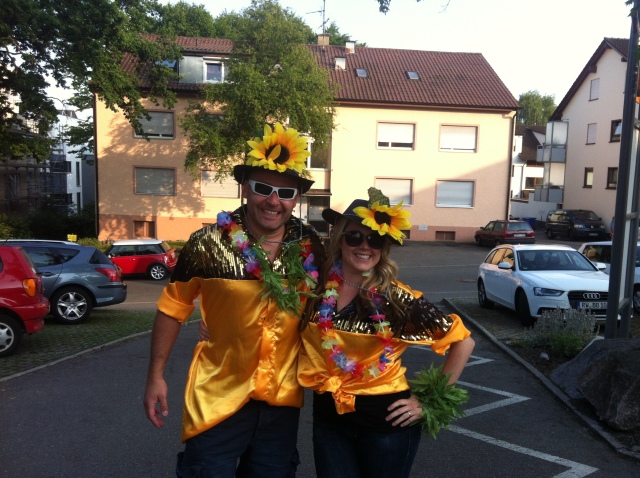 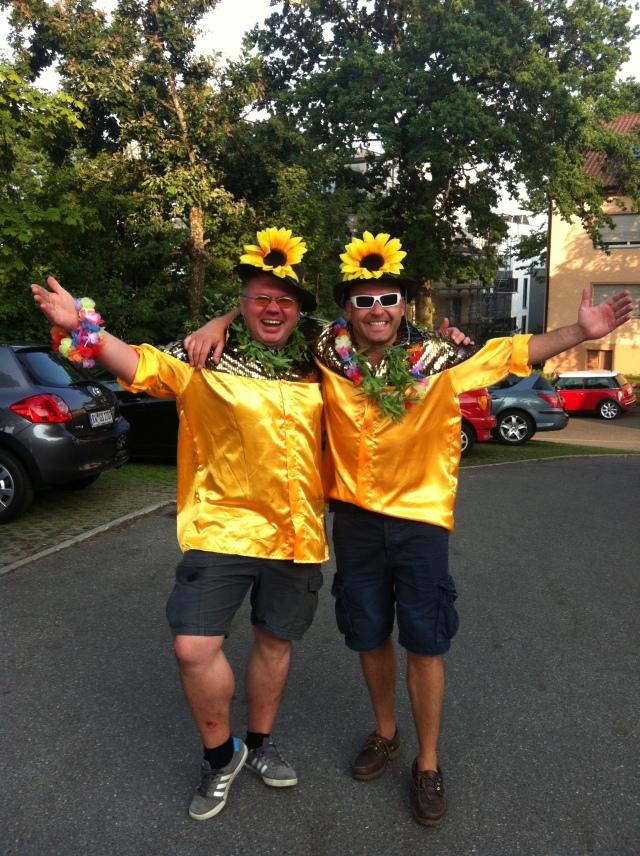 The music is of course about happiness and love and Dieter kind of puts a swig of “Salsa” in there. A little spanish twist, if you will. But the crowd loves him and they go totally crazy when he comes out to sing! I sneakily took a few pictures of some others around us and their outfits. Everyone comes dressed up as hippies so it’s kind of funny to see all these Germans walking around dressed like they missed Woodstock. 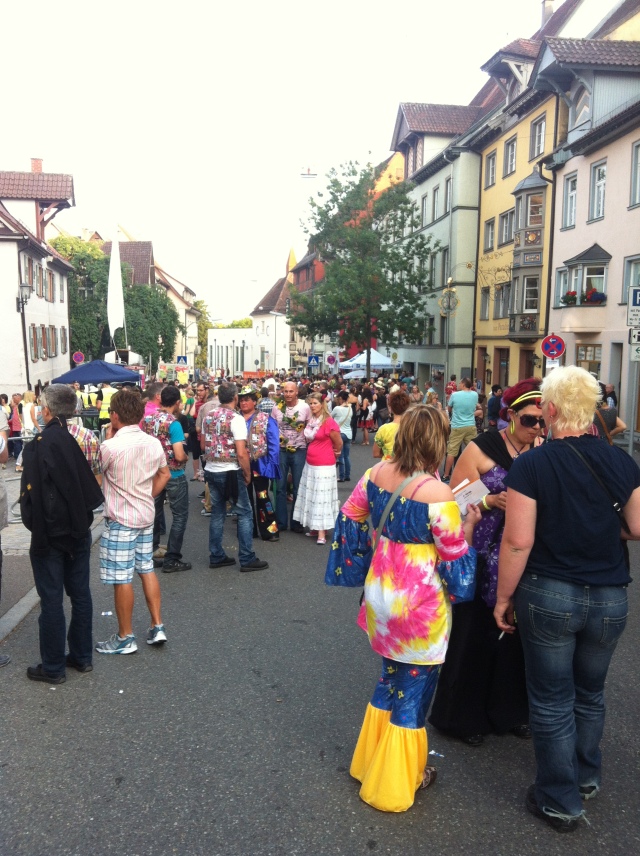 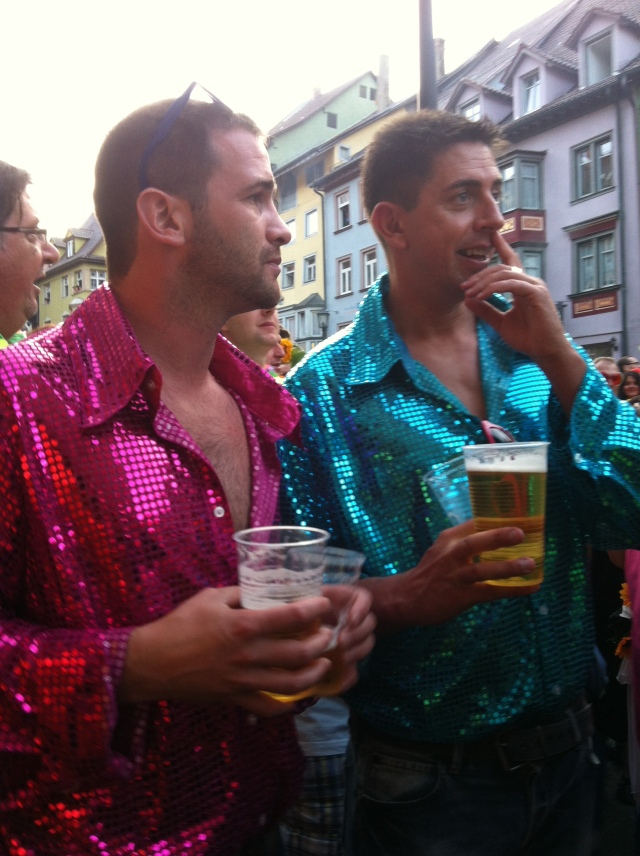 The thing about Dieter Thomas Kuhn is that he was very big back in the day and he was well known for his hair…that beautiful curled under hair. (OMG!) and the best part of it all…he wears a chest toupee!! YES! As if you couldnt really tell from the pictures above, but it’s true. Some fans even wear the same toupee to his concerts to show their appreciation for his Royal Hairiness! 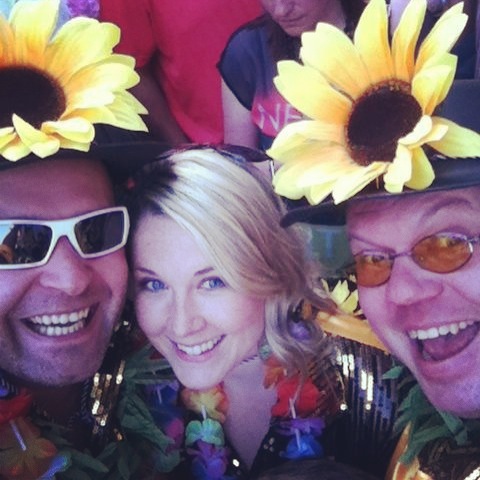 Of course, I wouldn’t leave you without letting you hear some of his music so I will leave you with this joyous video and let you decide…is he for real or is he just a joke?

After almost 2 years here I think one of my top 5 issues is remembering peoples names. Sometimes they are just so different and for whatever reason, my brain just refuses to allow me to contain this info! So, I’m sitting here reading the back of the newspaper which lists all of the people who just got married, passed away, or had babies. No love stories and all that hullabaloo included…just names.

Here are a few that I can not pronounce to save my life. Thank you to the hubs for helping me on this!

Thoughts?! Are these names you have a hard time pronouncing too? Maybe even to remember?!

I’ve recently become part of the Twitter phenom. Actually, no…I’ve been apart of it for a long time just never used it and couldn’t get into it. Now that I have lots of time on my hands I got into it and have been finding all sorts of things that have been catching my eye. The internet really is the funniest place ever. ( I don’t get out much, clearly)

For those of you who haven’t yet, you need to check out #whatshouldwecallme. It’s just hilarious. There are no words. So I’m sharing a few of my favorite funnies! Headlines make it even better 🙂 Enjoy and Happy Easter weekend! (Wait until you see what I’ll be making for our dinner! YUM YUM!)

1. When someone says they don’t need to drink to have fun.

2. When I almost hooked up with my friend’s ex.

3. When the guy from the bar tries to sleep over.

4. When people in front of me are walking really slow.

5. When you realize your friends are taking a group photo without you.

6. When I give someone my phone to show them a picture….and they start scrolling through all of them.

7. When you see someone has gum.

8. When you’re trying to do work and your favorite song comes on.

9. When you lie to your best friend and say you’re too tired to go out. But then you see them out at the same bar.

10. When I think too hard about where meat really came from.

11. When I drink something right after I brush my teeth.

There are millions of these and I’ve spent WAY too much time looking at them. Go check it out and give yourself a reason to avoid the family for a bit this weekend. 🙂

Until next time, Readers!!! xoxoxox