I’ve been promising people I would write this post since I’ve flown with our Labrador overseas twice now (Poor baby!). So here we are! Finally getting down to the nitty gritty of how to fly with your pup. Most of us can’t afford private jets so this is how it is done! 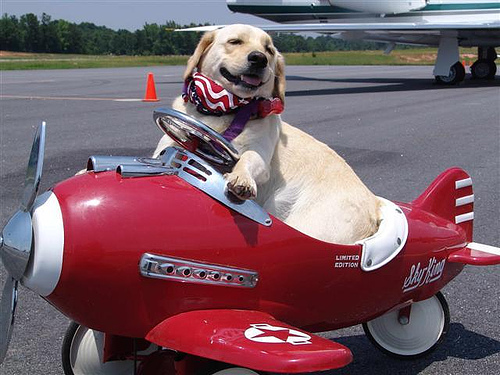 Flying to Germany the first time, Harley was ten months old. Just a little itty bitty baby! Except he wasn’t THAT little. If you do have one of those ankle biter dogs (20lbs or less), then buy a carry on bag for him and bring him with you. But those of us with bigger dogs have to do things a bit differently. So first things first!

Going away for a few weeks and want to bring your pet?? DON’T!!

You are only going to make your pup’s life miserable. Do him a favor and find him a place to stay for the time you are away. Unless you are actually moving your life, don’t put your pet through this. It’s very stressful for them and it’s very stressful on you as well. Dogs can get all sorts of issues like reactivity, fear aggression, and social issues. New smells and unfamiliar places can really effect the behavior your dog.

IMPORTANT! PLEASE READ! Many people have looked into shipping their pet with a specific service. We had visited the offices of PETAIR in Frankfurt and spoke with the manager there. He HIGHLY recommended against shipping our dog with them for one very good reason. These airline services are great for large animals like elephants, horses, or even exotic pets like snakes, etc. For a domestic animal like a dog or cat its not needed. The way these services work is they do all the customs documentation for you but you have to consider that your pet is in their care hours before takeoff and once they do reach their final destination, the animal must stay in the crate behinds the scenes for an additional 4-6 hours JUST to go through customs. Whereas when you ship your dog as “cargo”, he is brought right off the plane with the baggage. No waiting, no customs other than what you go through in the airport.

Here, let me help you. There are two things you are looking for when choosing a flight.

A. The most direct flight possible: The stress on an animal when having to switch flights is immense. And not to mention, you are not allowed to see them between flights. They can not leave their crate and can not see you. The less time they have to spend alone, the better. (We chose a direct flight from Newark to Zurich. For the second time Frankfurt to Detroit.) Most airlines will state their restrictions or guidelines for traveling with a pet. Do the research before you book a flight.

B. How does the airline handle animals: We checked around at a few and we chose without a shadow of a doubt, Lufthansa. Why? Because even though your pup has to travel in the baggage container doesn’t mean they have to be completely uncomfortable. Lufthansa has an actual specified place for live animals that is climate controlled. Our captain told me after the flight that he kept an eye on the air pressure in the area our Harley was and he really tried to keep the ride as smooth as possible. Very reassuring. Note: Very important that you aren’t flying during extreme weather. Not in hot season: June – August or cold season : December – February.

Harley waiting to go into the airport shortly before his big adventure! One last whiff of German air!

Be sure to reserve or book your dog’s flight and to speak with the airline to make sure that all information is connected to your ticket. Each airline only allows a certain amount of animals on each flight.

This is one of the most important parts. If you do not have the correct size to comfortably fit your dog and for him to be able to stand and turn around in it, the airline reserves the right to deny your dog on the flight. And they have done this so be certain! We got the largest crate possible for our guy to make sure he had enough room. He’s also 86lbs so it works for him.

Harley testing out his crate.

Here is a calculator to find the right size crate for your pup: click here

Not all crates come with the water holder and we found a good one on amazon but you can find many at Lixit. More like what you would see in a Gerbil cage but its better that it doesn’t spill all over in a turbulent situation on the plane. Make sure you get one that has a bottle attachment for the crate. Some airlines require that you have water for your animal. Test this out with them prior to the flight as well so they know how to use it.

If you’re dog is like ours, he doesn’t use a crate at home. He only did when he was potty training in the beginning of his life. Once we had the crate we washed it completely and put a few of his toys and blankets inside. When he would go in the crate, he would get a treat. This helped him associate the crate as a good thing! His is big enough that we could actually sit inside with him so we did that from time to time too. It’s like a little fort! 🙂

Harley’s crate with his dog bed, blankies, favorite toys, and a shirt with mommy’s scent to keep him calm

You will want them to get used to the crate and associate it as a “safe” thing several months before you fly.

I did all the background research to see if the airports we were flying to had a special “Dog Only” park or grass area. I did the google maps search to also look for any kind of walking area for him. You can also look on the airport’s website or call the information desk at the airport to ask them. Some airports even have dog areas inside the gate area.

In order to fly anywhere, first it’s important to find out what the restrictions are for that country you are traveling to. Some countries require containment for up to 6 months, which I can’t imagine is enjoyable for the pet or for you. We were flying to Germany and of course back to the US 4 years later. What we needed for both countries was the same.

1. Dog must be micro-chipped.

2. Health records must be up to date with kennel cough and rabies immunizations.

3. You will need a signed health certificate from the veterinarian no more than 10 days before you fly.

4. Check with your vet to make sure that the pup has no illness or any other issues that could restrict him from flying like heart problems or arthritis. 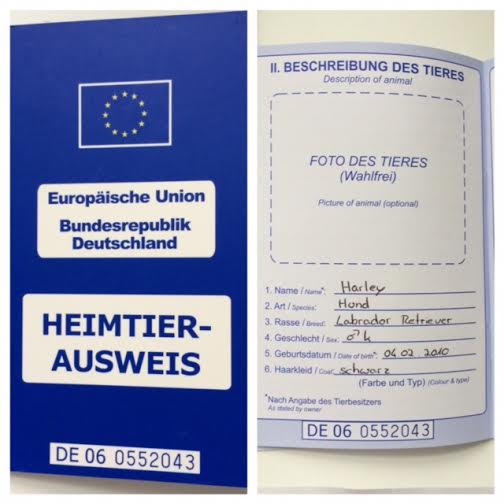 In Germany they actually gave us a little passport for him with all Harley’s info so that was cute and helpful!

The only time I would suggest you see the vet about medicating your animal before flying would be in EXTREME situations. If your dog is nervous about everything at home, has severe anxiety, has the tendency to bite or attack when in extreme situations then I would say go for it. But if you are to do that…be sure to test the medication on your animal several days before you go. Be prepared that they may not be able to move, they won’t use the bathroom, and are completely lethargic. They won’t sleep..but it will look like they are really messed up.

We tested it on our dog but wanted to give him a very small dosage just to take the edge off as this was his second time. The Vet gave us medicine that she would normally give to a 35lb dog. Our dog is 85lbs… so..no harm no foul right? Wrong. We gave him one tablet and he was ridiculous. Couldn’t move from off the floor, we had to put him on the couch. It was awful. I felt so bad! The day of the flight I gave him less than a quarter of a pill and he still did all his crazy things, I think it just took the edge off.

If your dog is too medicated (not walking on his own, lethargic, etc.) the airline will not allow him on the flight. And for good reason.

The reason you shouldn’t medicate your pup is so they can self-regulate. When it’s too cold they won’t know to huddle to stay warm and their heart won’t work as it should to produce energy and warmth. You don’t want this in a plane where no one can get to him. He needs to get up and move a little bit to circulate his blood. He won’t be doing that when medicated. And the result of not being able to do this could be fatal.

– The first time around we made the mistake of making the 5 hour drive to Newark airport and then putting ourselves and the pup on a plane ride for 9 hours immediately following. We learned a hard lesson that time as first-timers and flying back to the states we drove the 3 hours to the airport (to get the most direct flight of course) and stayed overnight at the airport hotel with our furry guy. We were able to wake up early, go for a nice walk and have play time before heading to the airport.

Harley relaxing in the airport hotel the night before his big adventure!

– We brought an extra bags of food (thrown into a plastic grocery bag) and brought them in our suitcase and carry on. We knew we would have to invest in food once we arrived so we had quite a bit with us to transfer Harley properly into his new food.

– Stay calm! Dogs pick up on fear and stress from their pet parents. Take a few deep breaths and remain calm.

– On top of the crate place a note and/or a picture of your pup with his family members. Write the information of the flight they will be traveling on so that the workers behind the scenes see him more as a family member and take a little bit more caution. 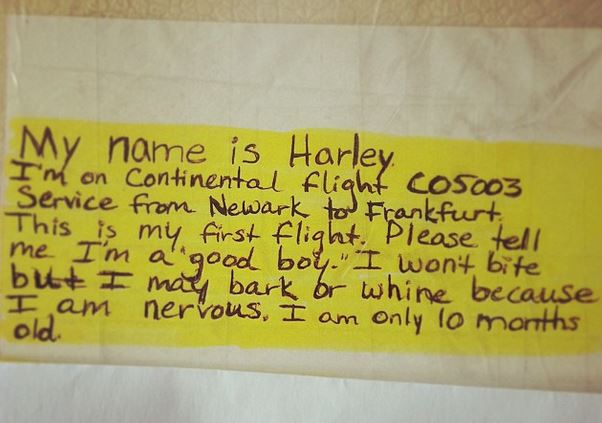 So there you have it! Input from a regular old gal who experienced it all first hand! I hope this helps you in your travels wherever you may go with your furry family member. If you have any questions or think I left something out, please let me know in the comments!