Three-year-olds are ridiculous. They are emotionally charged, whiny, and logically disconnected.

My dudes are not exempt from the nonsense, unfortunately, and so I’ve had to curve my “parenting skills” constantly. Even more so, with twins, you have to change the way you parent each kid as both are completely different individuals with completely different needs. It’s been a challenge, to say the least.

Blondie is what the modern world is now calling a “spirited kid.” What is that you ask? Let’s be real…he’s full of the devil! Full of energy, spite, and love. He is sensitive and high-strung, loving yet psychotic, lol. No for real…he’s a tough cookie but I am certain he will do amazing things when he’s older. Own a Fortune 500 company or cure cancer. But for now, he’s a doozy and I’ve been trying to find ways to comfort him before his massive blowups happen.

Brownie is the complete opposite. He wouldn’t hurt a fly but is very very sensitive. To the point where if we tell him not to do something and logically explain why not to do said thing, he will throw himself on the ground as if he was shot down. He literally just falls out of his chair without bracing his fall. It’s pretty hilarious actually. Kind of like those fainting goats. That being said, he doesn’t get in trouble much but he also won’t listen when you tell him “No.” So, it’s a bit out of control on both ends here.

I began to dig around for an all-around thing that would work for both extremely different children. I’m not sure where I first heard of the idea of a calming corner but I happened to search a bit and found a zillion things on Pinterest and other places about it. Phew! I’m not the only mother who has lost her damn mind and needs SERENITY NOW!

First things first, we had to find a spot to have this said Calming Corner. I don’t know why but setting it up in the formal dining area was good enough. I needed to have these two jokesters in plain view so another room wouldn’t have worked. Then I trucked over or mom-vanned it over to the dollar store and grabbed all the essentials to make a calming corner..well..calm.

So in our bucket is:

2 sensory bottles (1 with glitter, the other a lava lamp look)

3 playdough filled balloons with different emotions drawn on them (Happy, Sad, Angry) which act as a stress ball of sorts.

2 squrimy thingies (I bet you like it when I talk about technical, don’t ya!?) 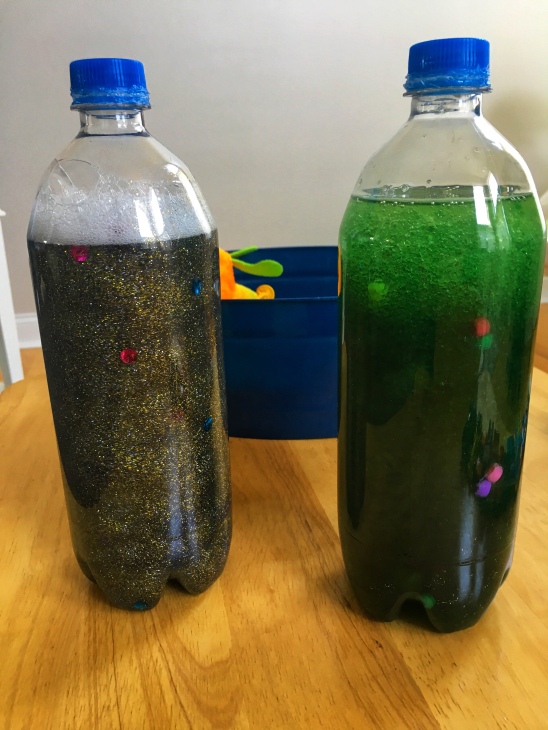 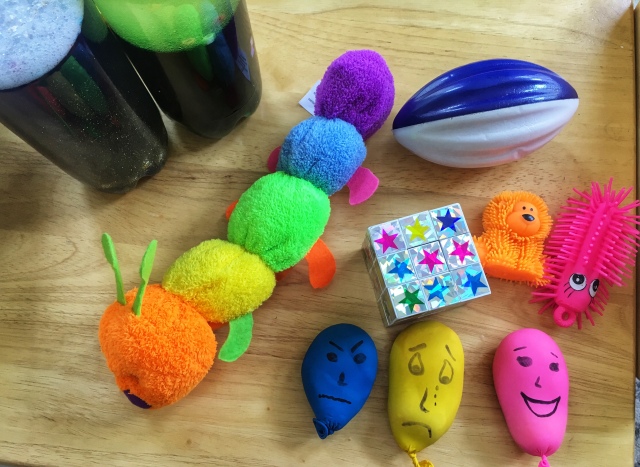 The only rule that is set with this area is that when they are done playing there, they have to put all the toys back in the bucket so they are ready for the next person to use. Essentially, the idea is that we try to catch them before they are upset or if we see that they are starting to get emotional about a situation we ask them if they want to go to the calming corner for a little bit. They are allowed to bring their blankets, loveys, and pacifiers with them if they want and they can choose when they are done. Both boys have sat there quietly for 15-20 minutes at times. 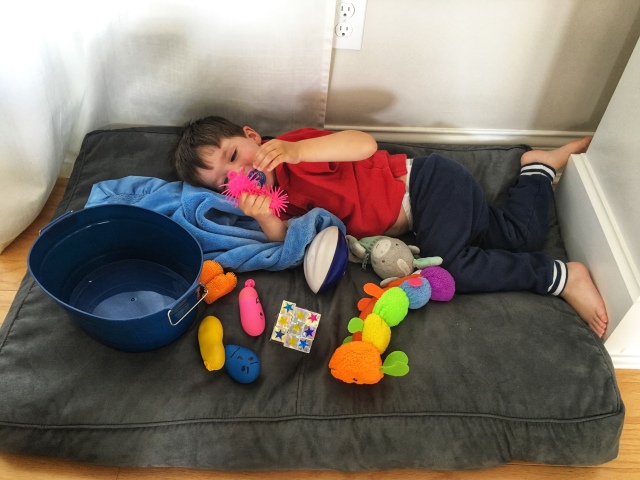 This is not to replace time-outs. It’s supposed to be a “safe space” where they can go to try to identify their emotions and work out how to handle them. It’s not easy being green or three for that matter and this so far has been a great option for both of them. At this point, I’m willing to try anything to get these kids to quit their antics but let’s face it, toddlers will be toddlers.

Hell, I should throw myself in the calming corner and see if they leave me alone for a minute actually! (Going to go try that right now! I’ll report back! ha!)