Oh people…where to begin! So last week I went to the city of Stuttgart to meet up with a gal pal (another American girl who fell in love with a German!) for a St. Patrick’s Day celebration at an Irish pub.

We met up in the Hauptbahnhopf (The main train station) because of one VERY important reason. A new Dunkin Donuts had just opened up. As we approached the newly opened cafe the smell of coffee and bad perfume was overwhelming. Thats what happens when you’re at a subway. Just all sorts of funky going on!

Surprisingly, Dunkin Donuts was hard to miss. There was a massive line of people just waiting to get their hands on the American staple. There were a few passer-bys that murmurred how gross it was. Those people CLEARLY have never had such awesomeness. 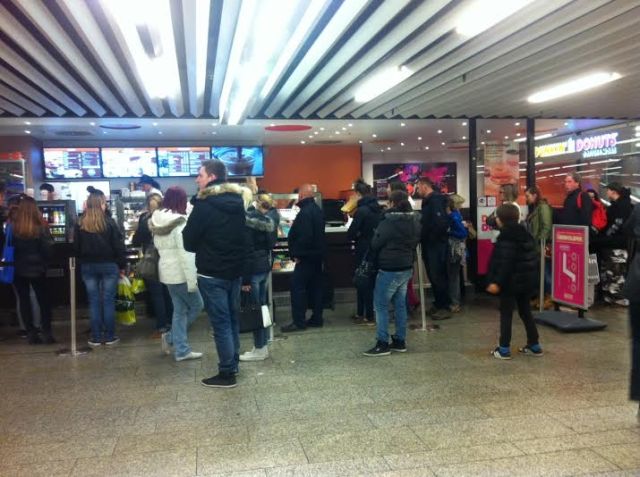 They handled things a bit different at this particular DD. I think it was mostly because of the volume of people but the focus was primarily on the donuts. They were in a large case presented to the crowd. People would walk in front of the case and point to the donuts they wanted and the hard-working girls would fill up the boxes and bags. These donuts were crazy bright colors and I had to laugh. Germans often tell me that the bright colorful frosting is just SOOOO American. And it was actually a turn off for me but that may have something to do with me living here for three years now. You get used to seeing dull colors.

Of course when it was our turn, Toblerone just HAD to have a boston cream donut. And of course…those were being delivered in the next 20 mins so I had to wait. And wait….and wait. To give you an idea of all the different flavors they had here’s a snapshot of their menu. Click here to see their website of what other things they offer. Not to mention the crazy bagels they offer. Like cream cheese and jelly or PB and jelly…hmm…interesting! Very American! I can’t imagine those being so popular! 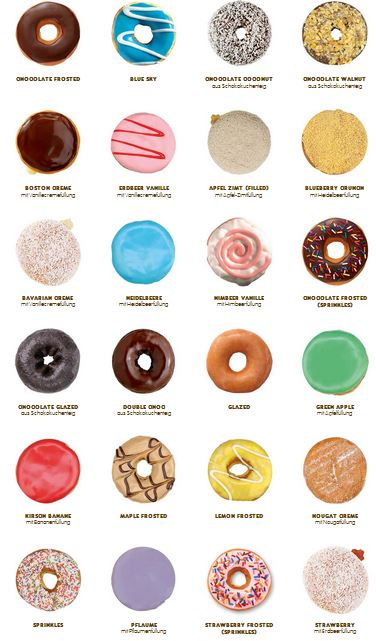 We did get iced coffees which was devine but I had to laugh. Everytime anyone ordered that they would go to the back room to get the ice. Germans do not put ice in their drinks, let alone their coffee! So this was funny for me to see them putting in such effort! 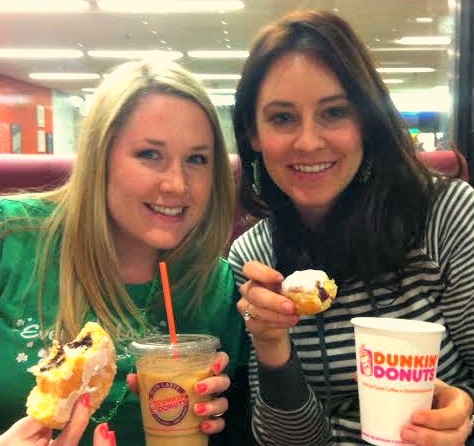 We got a box of donuts: Nutella filled, strawberry sprinkles, two boston cream, one raspberry filled with vanilla frosting, and a maple frosting caramel filled one. Happy as clams we sat down to feasts on our breakfast of Champions and all the sudden old hip hop music was BLASTING through the speakers. I literally had to talk louder and listen harder. Dunkin Donuts was turned into a club at 11am! What the heck! But it was hilarious and made the experience that much more enjoyable.

Even though we travelled an hour by car, and a train ride later, it was the greatest Saturday I’ve had in a while. It felt like home…and the best part…it tasted just like home. Normally in the US I wouldn’t care much for this type of thing but when you’re away for so long, its these little things that give you the sense that you aren’t so far away from home. Thank you Dunkin Donuts.

Not to mention we finished the night off with some good old fashioned St. Patrick’s Day fun! 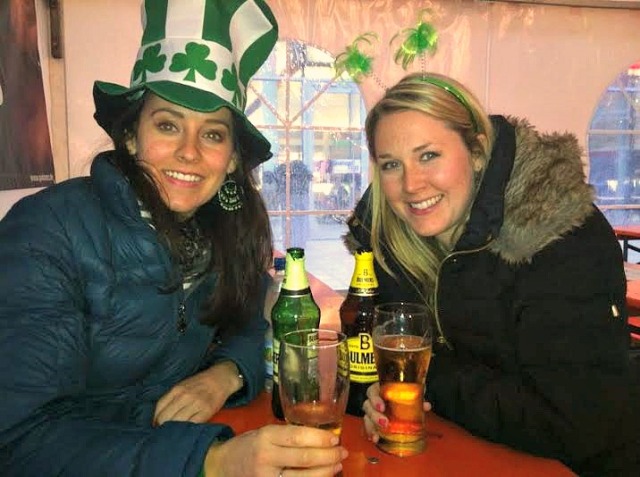 Until next time, Readers!!! xoxoxoxo

6 thoughts on “We Found Love In A Dunkin Donut”